EIA is committed to promoting transitions to the most climate- and environmentally-friendly alternatives available and opposes transitions to mid- and high-global warming potential (GWP) “transitional” alternatives. We work to highlight case studies and details of technologies and energy savings that demonstrate low-GWP technologies are available now, are achieving superior performance compared to HFC-based systems, and are increasing in market penetration. The HFC-free alternative refrigerants described in this section have very low-GWP and achieve high-energy efficiency performance. 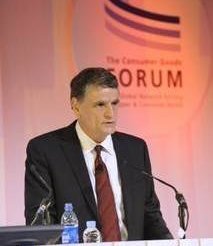 In addition to highlighting low-GWP technology, EIA facilitates transitions by end-users (food and beverage retailers, etc.) through engaging with food and beverage retailers. Globally, a typical HFC commercial refrigeration supermarket system has an average annual leak rate of 30% annually, equivalent to the CO2 emissions from driving nearly 390 passenger vehicles for one year. However, with proper leak detection and maintenance, leak rates can be reduced to less than 10%, while conversions to available low-GWP technologies would reduce direct greenhouse gas emissions of refrigeration systems to close to zero. EIA has produced several reports focused on encouraging food and beverage retailers to transition to low-GWP technologies, including the Dirty Dozen and Transitioning HFCs in India

Carbon dioxide (CO2), or R-744, is a natural, energy efficient climate-friendly refrigerant with a global warming potential of 1. CO2 systems are applied in many heating and cooling systems, including but not limited to supermarket systems, vending machines, residential and commercial heat pumps, and motor vehicle air conditioners. Now installed in over 6,500 stores worldwide, transcritical CO2 supermarket refrigeration systems are quickly gaining market share as the climate-friendly alternative of choice for the commercial refrigeration industry. CO22technology is also becoming increasingly an optimal solution for small and medium-sized industrial refrigeration systems, particularly as these systems give off excess heat that can be used to simultaneously heat water and provide air conditioning to a facility.

Ammonia (NH3), or R-717, is a natural refrigerant that has been used for more than a century. It has a GWP of 0 and excellent thermodynamic (heat transfer) properties. Ammonia is widely used in large industrial process refrigeration systems and cold food storage in systems using chillers, and large distributed systems. Due to its toxicity, ammonia is subject to standards and regulation that ensure its safe use. The use of ammonia as a primary refrigerant in a system with a secondary loop, or in new and innovative low-charge systems entering the market is expanding the number of applications and end uses where ammonia can be applied safely, cost effectively and achieve significant energy savings.

Hydrocarbon refrigerants and foam blowing agents include propane (R-290), isobutene (R-600a), other hydrocarbon blends such as R-441A, and cyclopentane. These natural refrigerants have GWPs of 15 or less and also have excellent thermodynamic properties leading to energy efficient operation when used. Hydrocarbons have been widely adopted in household and commercial refrigeration and are increasingly being applied in self-contained (window ac) and single-split (wall-mounted with an outside condenser) air conditioning equipment and various foam applications. Although hydrocarbons have flammable properties, the safety risks of their use as refrigerants is negligible low when used in properly designed equipment. Modern hydrocarbon equipment include specialized manufacturing and design requirements such as leak tightness testing, installation of safety valves and leak detection equipment, and clear instructions and warnings governing use.

Water (R-718) with a GWP of 0 is the oldest natural refrigerant in existence. It can be used in a traditional vapor compression refrigeration cycles and absorptions chillers, and various kinds of ‘not-in-kind’ systems described in more detail below, such as adsorption equipment, evaporative cooling, district cooling, and electrochemical compression.

Air, or R-729, has a GWP of 0 and is used in air cycle refrigeration systems that rely on a Brayton or Joule cycle and have been applied in refrigerated cargo ships since the turn of the 20th Century, or in a traditional refrigeration cycle. Air cycle systems are well suited for ultra-low temperature applications, with some systems such as a Pascal Air system can save up to 50% on energy consumption when compared with systems using HFCs. This type of system can be applied to applications ranging from cold food storage and freeze drying to uses in the medical and chemical industries.

‘Not-in-kind’ includes a number of different types of cooling systems, some of which have been in use for centuries, such as evaporative cooling. District cooling is another not-in kind technology which delivers cooled water to an entire district either using cold water from the ocean or deep lake or using a central cooling facility with ammonia or other refrigerant to cool the water delivered. Another not-in-kind technology is adsorption cooling systems, which are driven by heat and utilize a solid ‘sorption’ material in combination with a refrigerant, usually water or ammonia. Others like magnetocaloric refrigeration which relies on a magnetic field to create a cooling effect, and electrochemical compression, which uses electricity, water, and a proton-exchange-membrane technology, are on the cutting edge and have been demonstrated but yet to be commercialized. Whether already commercially developed or still in the early stages of technical demonstration, ‘not-in-kind’ solutions are likely to play a big role in the future of climate-friendly HFC-free cooling.

The most climate-friendly systems reduce or eliminate the need for electricity consumption by being paired with a solar thermal or waste heat energy source, for example in solar adsorption chillers for cooling, or waste heat driven adsorption heat pumps.

For more information on not-in-kind technologies, see EIA’s 2015 Supplement to Putting the Freeze on HFCs

The AIM Act: Your Questions on U.S. HFC Legislation – Answered

01/07/2021
A new year’s gift for our climate came wrapped in the coronavirus relief package passed by Congress at the end of 2020. Among the bill’s several significant climate provisions is the American Innovation and Manufacturing Act, or AIM Act, that enacts a phase-down of hydrofluorocarbons (HFCs).

Can I be HFC-free? A Quest for Climate-friendly Cooling

08/10/2020
Supermarkets in particular have enormous refrigeration systems that extend past the display cases to back room chillers, refrigerated trucks, cold warehouses and so on. With such large systems, supermarkets are among the largest corporate offenders of HFC use, with thousands of tons of these chemicals throughout their cold chain. Yet out of nearly 40,000 supermarkets in the U.S., barely 1% are known to have transitioned to HFC-free systems; our Supermarket Scorecard shows that action and change throughout the industry is needed. These large companies have a greater climate footprint than you or me, and thus a greater responsibility to transition to climate-friendly alternatives.
See all Blog Posts

03/29/2021
The climate impact of cooling equipment, including fridges and air-conditioners, is two-fold: they use huge amounts of electricity and often rely on super-polluting refrigerant gases such as hydrofluorocarbons (HFCs).

02/15/2021
An EIA investigation into dozens of supermarkets in the greater Washington, D.C. area, including Virginia and Maryland, found a majority of stores to be leaking super-pollutant hydrofluorocarbon (HFC) refrigerants
See all Reports

06/02/2021
Today, Walmart investors voted on the first-ever shareholder resolution on refrigerants and their related climate impacts. The initial count indicates 5.5 percent of investors voted in favor of the proposal filed by Rhode Island Treasurer Seth Magaziner, urging Walmart to disclose how it will limit its impact on climate change by increasing the scale, pace, and rigor of its plans to significantly scale back hydrofluorocarbons (HFCs) used in its operations.

05/03/2021
Today the Environmental Protection Agency (EPA) released a proposed rulemaking to establish an allocation system for the phasedown of hydrofluorocarbons (HFCs). The proposed rule is the first step to implement the American Innovation and Manufacturing Act (AIM Act), the new climate law that sets the U.S. on course for compliance with the Kigali Amendment to the Montreal Protocol. The rule proposes an allowance allocation and trading system, which will determine the amount of HFCs an entity can produce or consume, and create the mechanism to phase-down domestic HFCs.
See all Press Releases

02/15/2021
An EIA investigation into dozens of supermarkets in the greater Washington, D.C. area, including Virginia and Maryland, found a majority of stores to be leaking super-pollutant hydrofluorocarbon (HFC) refrigerants
See all Videos

What are the HFC-free Technologies?